We're an active group of Conservatives, striving to make our constituency a better place. We support Councillors, council candidates and our MP, Jason McCartney. We're a voluntary organisation and we rely on your support.  If you wish to take an active role in the Colne Valley Conservative Association please send your contact details to any of the Association Officers, who will be pleased to explain which positions are available, and assist you with your application. 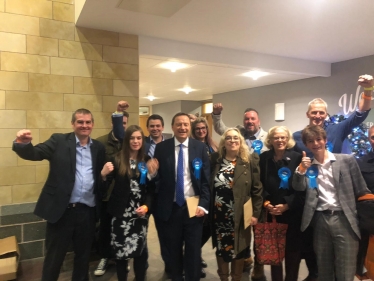 Jason and Donna Say Thanks!

Both of them would like to thank everyone who supported them and they will do their best to serve and represent everyone in our local area.

Tell Boris what your priorities are

Your questions answered by Matt Hancock, Secretary of State for Health and…

The Prime Minister this morning set out our ‘New Deal’, an ambitious economic

This map shows the extent of the geographical area that we serve. This is the area of the United Kingdom that we represent on behalf of the Conservative Party.